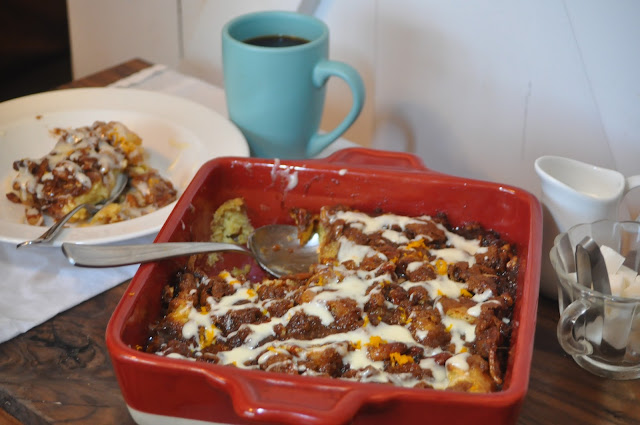 The first time I heard my friend discuss bread pudding, I was a little grossed out. My concept of pudding at that point was your standard vanilla pudding, and no matter how she explained how yummy bread pudding was, all I could imagine was chucks of mushy bread in vanilla pudding. Years later, however, I made a recipe of baked French Toast for a brunch with her, and she exclaimed to me, “THIS is bread pudding!” And I have been a staunch advocate of bread pudding ever since.

This recipe is an excellent way to use up stale bread. A few days ago, I made Cuban style bread for my Cuban-esque sandwiches, so I had some lovely stale bread to work with. If you want to purchase bread from the store and do not want to wait for it to go stale, simply cube your bread, place it on a sheet pan in a single layer, and dry it out in a low oven. Voila! Instant stale bread cubes!

Bread pudding can be a lovely dessert, especially on a cold winters day, but I love it best for brunch. I made this recipe when I was too lazy to make my cinnamon rolls; you get the flavors of a cinnamon roll with extremely little effort.

I added orange juice and zest to the glaze; with my classic cinnamon rolls I do not add the citrus. I felt that the richness of the custard, the streusel and the cream cheese glaze needed something bright and fresh to cut through it. Plus, grating some extra orange zest on top of your bread pudding makes for a lovely presentation. 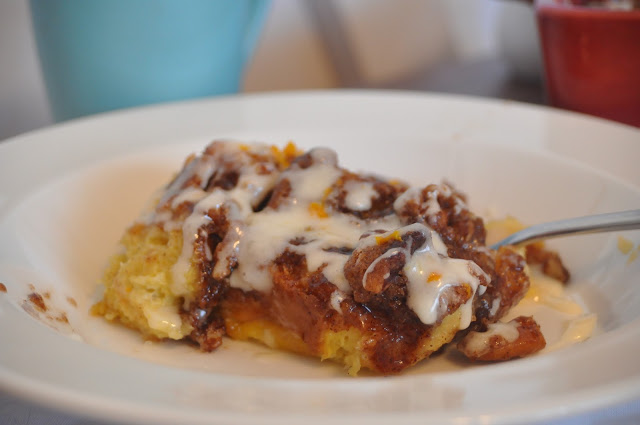 Directions
Preheat the oven to 350 degrees F. Grease a 8 by 8 by 2-inch pan.
Mix together the vanilla sugar, eggs, cream and milk in a bowl; add the vanilla. Pour over the cubed bread and let sit for  at least 20 minutes to allow the bread to soak up the custard.
In another bowl, mix together brown sugar, softened butter, nutmeg, cinnamon, vanilla paste and pecans.
Pour bread and custard mixture into your prepared dish. Dot the brown sugar mixture over the top and bake for 35 to 45 minutes, or until puffed up and bubbling. Remove from oven. Allow to cool on a rack for 10 minutes.

For the glaze:
Beat the softened whipped cream and confectioner’s sugar together until light and fluffy. Add in the vanilla extract, orange juice, and orange zest. Mix well to combine. Tablespoon by tablespoon, add your light cream until you reach the desired texture for your glaze. Drizzle over bread pudding. Serve warm or cold. 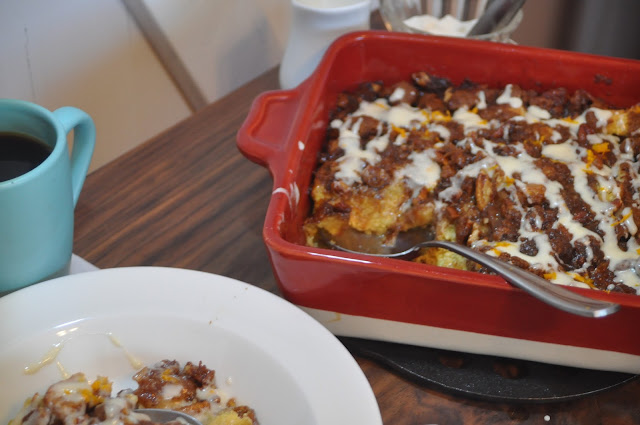