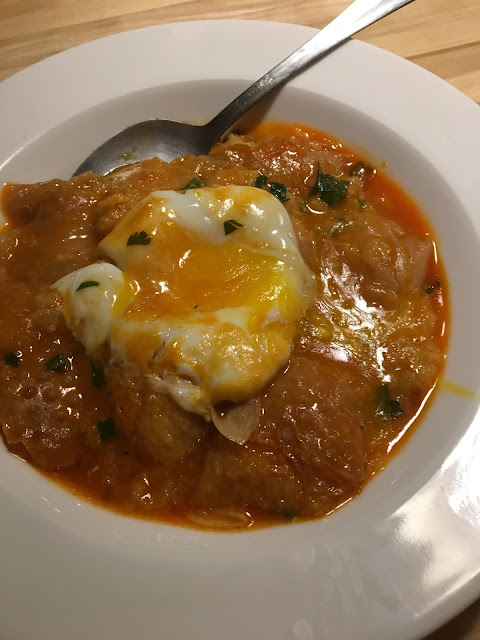 Garlicky, paprika-y bread soup, with eggs and chorizo. This is the dish of incredible rustic goodness that we are making today. I add croutons to almost every soup I make; this soup has that carbolicious goodness built into its DNA. This soup has a poached egg on top and smoky paprika with golden toasted garlic and chorizo, the best sausage ever invented. Y’all, if you aren’t making this soup right at the moment, you are missing out.
This is one of those soups that fill you with warmth, both physically and mentally.  It’s deeply satisfying, on an almost spiritual plane. I like it best with a little of the paprika garlic oil float to the top, and I can capture a spoonful of it alongside a bite of egg and ham. Make it; thank me later, after waking up from a blissful food coma.

Method:
Make the croutons:
Preheat the oven to 350 degrees F and line a baking sheet with aluminum foil. Sactter the bread cubes in an even layer and drizzle lightly with olive oil. Toss to coat. Bake in the oven for 15 to 20 minutes, until crispy and beginning to brown.
Meanwhile, add ¼ cup of olive oil in a heavy pot over medium-low heat. Stir in the garlic and cook in the hot oil until just lightly golden brown.  Add the onion and cook until translucent. Add the chorizo and cook for a few minutes until the ham develops a little color. Add the paprika and toast it in the oil for about a minute, then add the bread cubes and toss them all around in the flavorful oil. Turn up the heat to medium high.
Pour in the chicken broth, parsley, pepper and salt and give it a big stir. Bring the pot to a boil, reduce the heat, and leave at a gentle simmer.


Make four depressions into the top of the soup mixture. Crack one egg into a small bowl first, the pour one egg into each depression. Cover the pot with a lid and cook until the egg whites are firm and the yolks are to your liking, anywhere from 2 to 7 minutes. Ladle into a bowl and enjoy! 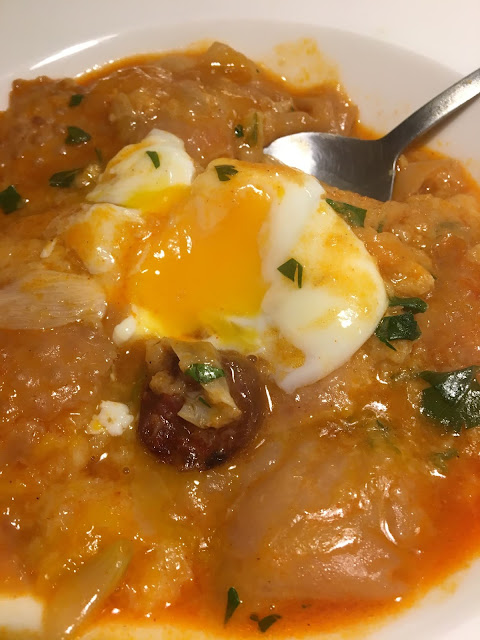