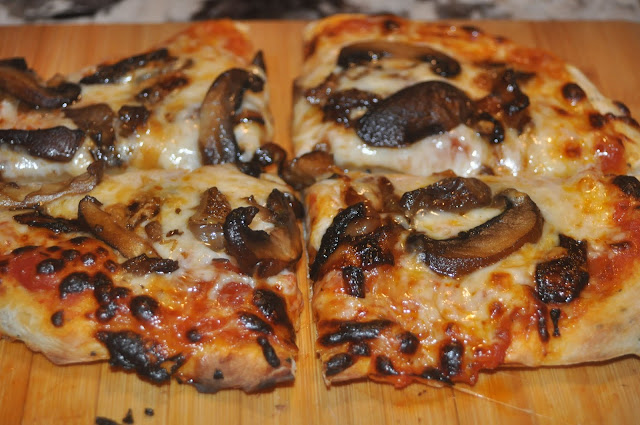 It's been a long time since I featured a unitasker gadget on the blog. Alton Brown, forgive me, but my countertop pizza oven is a dream. In less than ten minutes it heats up to over 600 degrees, it has a stone that is removable so you can wash it, and it cooks your pizza with the desired leopard print char spots in under ten minutes. It's red and looks fabulous too. The company that makes it is called Newwave and it's been going strong for me for 3 years now.

Sales pitch over. You know what is super delicious on pizza? Really good cheese paired with sweet caramelized onions and earthy butter sautéed mushrooms. This pizza is practically gourmet; I bought shredded aged asiago, shiitake, cremini and oyster mushrooms, and dough from the local pizza joint. So, so good. Make it, you will die with food joy.

Method:
Preheat your counter-top pizza gadget, or preheat your oven with pizza stone inside to 400 degrees. '

In a large skillet over medium heat, add 1 tablespoon of oil and the onions. Sauté until the onion are caramelized, about 20 minutes. Season with salt and pepper and set aside.

Add another tablespoon of oil and saute the  mushrooms until golden brown, about 7 minutes. Add the butter and cook other 2 minutes; season with salt and pepper.

Divide the dough in half and roll onto parchment paper. Spread on your desired amount of sauce then top with both cheeses, mushrooms and onions. Slide the parchment paper onto the stone. Cook in your gadget or bake in the oven until golden brown and slightly charred; about ten minutes. Remove the pizza from the oven and parchment paper, slice and serve. Yum!