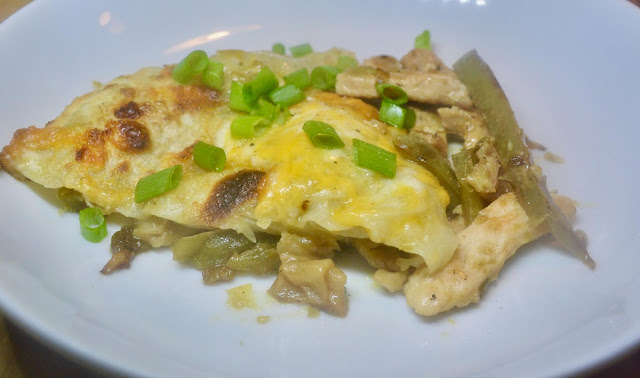 As a kid, I rarely ate Tex-Mex. I am apparently making up for lost time. Now I know I love tacos, burritos, enchiladas, chimichangas, taquitos and any number of twists on those classic recipes. Enjoy this iteration of a cheesy chicken green enchilada sauce casserole. Yum!

Preheat oven to 450 degrees F with a rack in the upper third.

Mix the enchilada sauce with 2⁄3 cup water. Set aside.

Heat 2 tablespoons oil in a medium ovenproof skillet over medium-high. Add chicken to skillet in an even layer; season with salt and pepper. Cook, stirring occasionally, until chicken is just starting to brown, about 5 minutes.

Add peppers to skillet with chicken; cook over medium-high heat until chicken is cooked through and peppers are softened. Add minced garlic and scallion light greens; cook until fragrant. Remove skillet from heat.

In same skillet, add chopped tortillas and 1⁄2 cup sauce mixture . Stir, scraping up any browned bits from bottom of skillet, until combined.