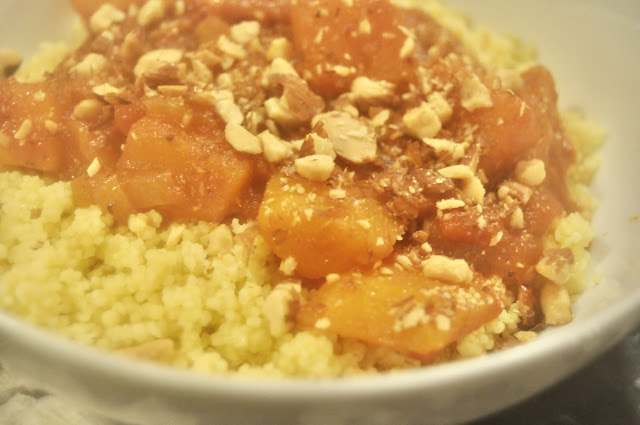 A tagine is a type Moroccan cuisine. The word "tagine" actually has two meanings. First, it refers to a type of North African cookware traditionally made of clay or ceramic. The bottom is a wide, shallow circular dish used for both cooking and serving, while the top of the tagine is distinctively shaped into a rounded dome or cone which allows steam to gather, condense, and drip back onto the food, perfect for slow-cooking. (I have one cooking tagine and one purely decorative serving one. In order to make this dish, you can use a dutch oven, though).

Second, the word tagine also refers to the succulent, stew-like dish which is slow-cooked in the traditional cookware. This version uses delicious butternut squash served on top of couscous. Enjoy!

Using a rolling pin or heavy skillet, crush almonds in a baggie; set aside for serving.

Heat 1 tablespoon oil in a medium Dutch oven or tagine over medium heat. Add onions and butternut squash; cook, stirring occasionally, until squash is slightly softened and onions are browned.

To pot with onions and squash, add tomatoes, harissa spice, 1 cup water, and 3⁄4 teaspoon sugar; bring to a boil over high heat. Season with 1⁄2 teaspoon salt and several grinds of pepper . Reduce heat to medium; cook, partially covered, until veggies are tender, a little under a half hour. Season to taste with salt and pepper. Remove from heat.

While tagine cooks, in a medium pot, bring 2⁄3 cup water until it comes to a boil. Turn off the heat, and carefully stir in couscous and 1⁄4 teaspoon salt. Cover and let sit until water is absorbed, about 5 minutes. Fluff couscous with a fork.

Serve butternut squash tagine over couscous. Garnish with crushed almonds and a drizzle of oil. Enjoy!