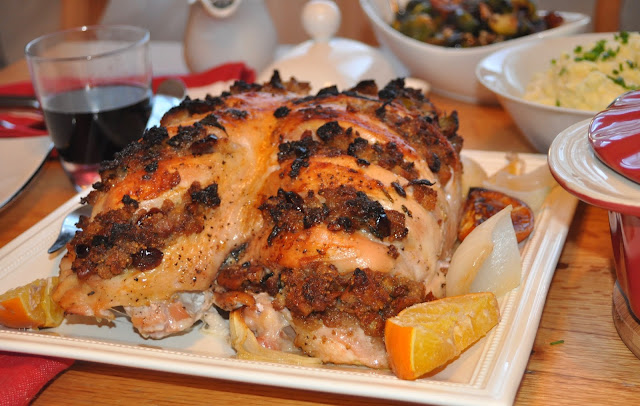 Since I live with just my husband (plus my three cats and dog), I do not make a whole bird for my own Thanksgiving table. I have in the past, and even with endless turkey themed leftover dishes (soup, sandwiches, hash, etc), we never manage to eat it all. It’s just such a waste. Someday my father might let me provide the bird for our family feast, but until then, I rather like making a stuffed turkey breast.
This is a fun twist on Thanksgiving Day presentation; I was inspired by the hasselback potato and the idea was born out of a desire to stuff the breast but not having any body cavity. I think it looks awfully fun on my holiday table and will generously feed 4 people, or two people with a consumable amount of leftovers.
I make enough stuffing to stuff the breast and also to bake in a dish on its own. The stuffing in the breast gets crispy on the top and full of lovely turkey juices, and the extra in a baking dish is just bonus! (I like having plenty of stuffing; leftovers make delicious savory waffles…. )
My gravy is very simple and I make it with my pan drippings. The soy sauce is my secret ingredient; I promise you won’t taste it- it will just enhance the meatiness of the gravy. I like it served over the meat, mashed potatoes and stuffing the day of, and it is necessary in a Thanksgiving Day sandwich. 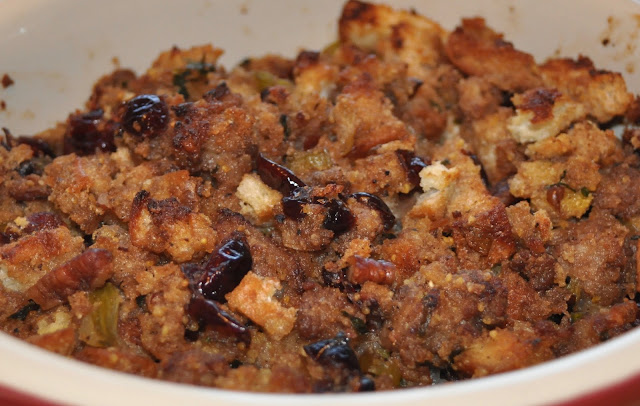 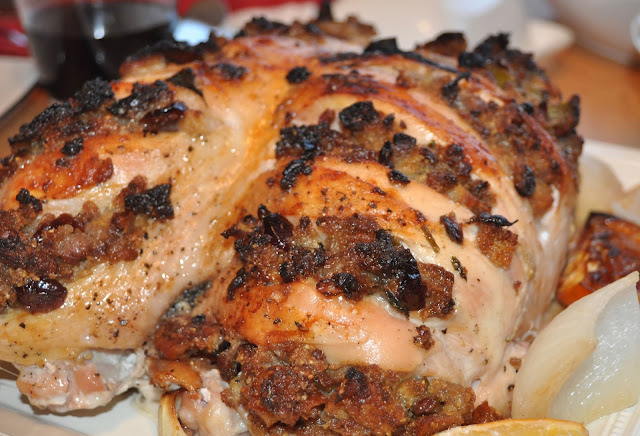 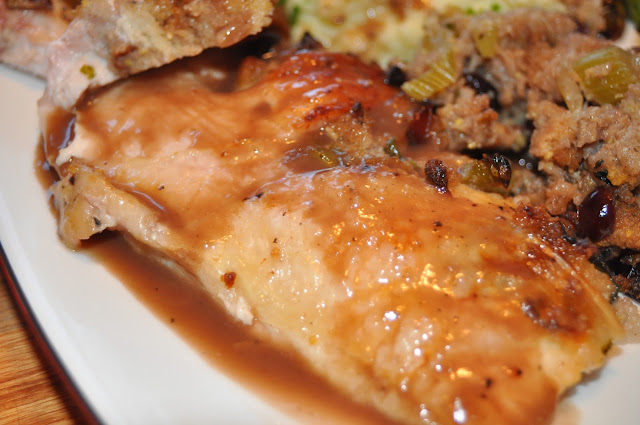 Method:
Add the ingredients for the brine to a large stockpot and bring to a boil so the salt and sugar dissolve. Cool to room temperature, the refrigerate until cold. Add the brine and bird to a large, covered container and refrigerate for one to two nights. Remove and drain the bird.
Pat your turkey dry with a paper towel. Remove the back bone and split the breast in half. Slice each turkey breast turkey horizontally to make little pockets for the stuffing- slice every inch and a half or so. Generously salt and pepper the turkey breast and set aside.
In a large bowl, combine dried breads, poultry seasoning, salt, pepper, sausage, nuts, cranberries, sautéed vegetables, garlic, egg yolk and chicken stock. Mix well. Divide the stuffing in half. Place one half into a buttered 1 quart casserole dish and set aside.
Preheat the oven to 375 degrees F.
Scatter the wedged onion and orange into the pan. Use the remaining stuffing to stuff the sliced pockets of the turkey breast. Salt the turkey again, and place it into a roasting pan. Roast the turkey for one hour, then remove it and brush melted butter on the skin. Return the turkey breast to the oven and add the stuffing. Continue roasting the bird until the internal temperature reaches 150 degrees F (or a few degrees under before you pull it from the oven to allow the remaining heat carry the temperature over to 150 degrees), about 20 minutes. Remove the turkey from the oven.
Leave the stuffing in the oven to bake another 10 to 15 minutes, until golden brown. Use this time to make your gravy and lest the turkey breast rest. Place the turkey breast on a platter.
Take the roasting pan and place it on the stove on a burner of medium heat. Add a splash of wine to deglaze the pan, freeing up all the browned bits. In a small saucepan, melt the butter and add the onions. Cook them down until golden brown. Add the flour and herbs, cooking for about a minute until the flour is a light golden brown. Add in the liquid from the deglazed pan, and the chicken broth, whisking constantly to avoid lumps. Add the soy sauce. Allow the gravy to simmer until thickened. Remove from heat and blend with an immersion blender. Taste and adjust seasoning as needed. Finish the sauce with the heavy cream.
Bring the turkey, stuffing and gravy to the table and dig in! 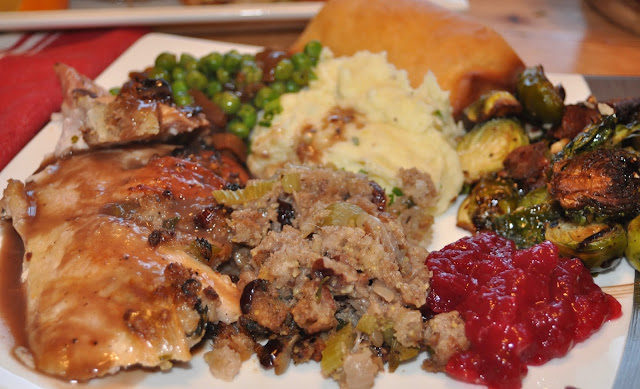