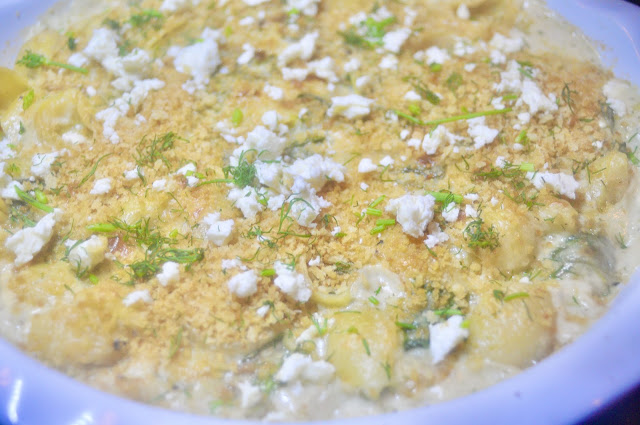 There are so many ways to mix up mac and cheese. My classic favorite, inspired by my dad, is to add peas to the boxed version. Fancier varieties involve mushrooms fried in butter and brie. This version adds feta and spinach for a little Greek inspired flair. Hope you like it!

Bring a salted pot of water to the bowl. Add pasta and cook, about 8 minutes, until al dente. Drain, reserving 1 cup of pasta liquid, and set pasta aside.

Meanwhile. in a medium skillet over medium heat, melt one tablespoon of butter. Add the panko and toast until golden brown. Remove and set aside, wiping out the skillet.

Whisk in the milk and pasta water and simmer until thickened. Check for seasoning. Add in the cream cheese, spinach, pasta, dill and half of the feta. Pour into a buttered casserole dish. Broil for a few minutes until golden brown on top. Remove from the oven and dd the toasted panko and remaining feta on top. Serve with extra dill of wanted.