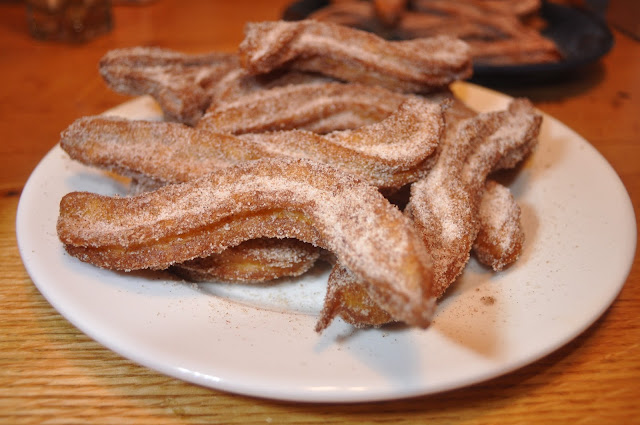 I love fried food. I love sweet food. Combine the two and I am in heaven. Churros are an amazing dessert by themselves, but with a traditional chocolate dipping sauce, they are out of this world. If you want something nontraditional and cinnamon rolls are your favorite breakfast pastry, try dipping churros into a cream cheese glaze. Believe me, you’ll thank me later, after you’ve devoured 5 or 6 of them.

Churros is a fried dough pastry, typically made of of choux. Choux pastry is also used to make eclairs, French crullers, beignets, profriteroles, croquembouches, St. Honore cake, gougeres, chouquettes, craquelins and so many more delicious things. Instead of using any leavening agents, choux pastry gets its rise from its high moisture content; when cooked in high heat, the resulting steam puffs the pastry up. Boiling the dough is key for this; mixing the flour into the boiling water causes the starch in the flour to gel, which in turns allows it to absorb more water.

Churros are a very popular treat all over the world, and are particularly enjoyed in Spain, Portugal, France, the Philippines, Ibero-America, and the U.S.A. They can be piped into different shapes, although currently the only one I can manage is a long rope. They are piped through a star tip to create ridges to catch more of the cinnamon sugar coating. Typically, people dip them in thick hot chocolate, chocolate sauce, dulce de leche or even coffee. Perhaps my cream cheese glaze will catch on as a new popular dipping sauce for them! Enjoy! 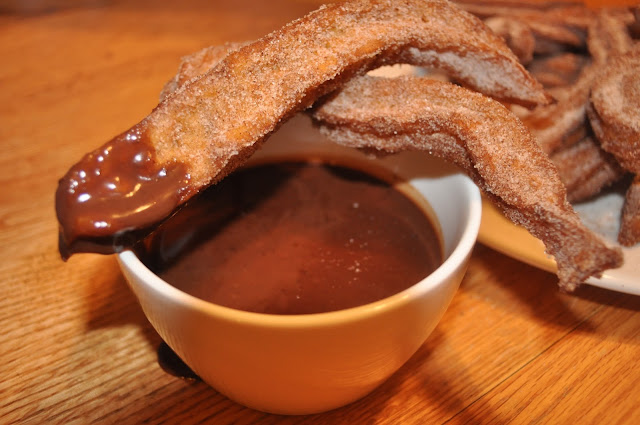 Method:
To make the cream cheese dipping sauce for cinnamon roll churros, combine your softened butter and cream cheese into a bowl. Beat them together well until thoroughly combine. Add in your powdered sugar a little at a time, until fully combined. Add in the vanilla bean paste and cream, a tablespoon at a time, until you reached your desired consistency. Set aside.

To make your chocolate dipping sauce, heat your heavy cream to a simmer in a small saucepan. Pour this over your chopped chocolate and cinnamon in a medium sized bowl. Let rest for 2 to 3 minutes to allow the chocolate to melt, then which well to create a smooth chocolate sauce. Set aside.

In a large bowl, combine your 1/2 cup sugar, cinnamon and nutmeg. Mix well and set aside.

Preheat your deep fryer to 375 degrees F, or use a large dutch oven fitted with a deep fry thermometer.

To make the churros, put your water, butter, sugars and vanilla bean paste into a large saucepan. Bring to a boil. Once the butter is melted, turn the heat down and add your flour, stirring constantly until the mixture turns into a ball. Continue to cook for a minute, stirring constantly.

Cool down your dough ball by mixing with in either stand mixer or hand mixer with paddle attachments for about a minute or two. You must cool it down or else you risk curdling your eggs when you add them to the dough. Add each egg, one at a time, beating well after each addition.

Place this dough into a pastry bag fitted with a star tip. Pipe 5 inch lengths into your preheated oil, being careful not to burn yourself. Do not overcrowd your fryer or else the temperature will drop and your churros can get greasy.

Cook them for a few minutes on each side or until they are a deep golden brown. Drain them on paper towels to remove excess oil then toss them into the cinnamon/ nutmeg sugar. Serve with either or both dipping sauces and enjoy! 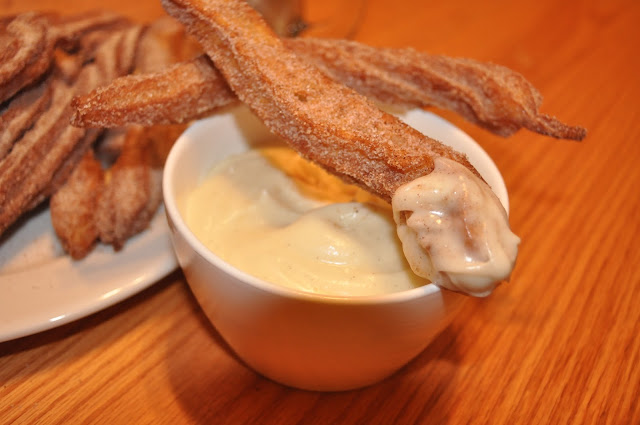