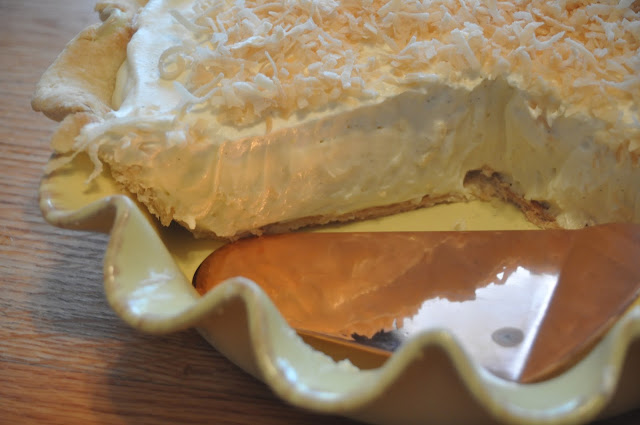 My husband’s favorite dessert of all time is my Coconut Cream Pie. I generally eat one or two pieces, and he devours the rest. He eats bites of it for breakfast, lunch, dinner, snacks, dessert, and late at night. He requests that I only make it once a year on his birthday, since he cannot help himself around this pie.

The first time I made this pie, I followed someone else’s recipe and it was delicious. However, that blogger asked me to use instant vanilla pudding mix, and that processed food taste was too present for my liking. I kept tweaking the recipe, trying to figure out how to replicate the texture while avoiding the packet of pudding powder. Finally, I realized my best bet was to break out my pastry cream recipe and go from there. The flavor is much improved, in my opinion, and the work involved is pretty minor for such a big taste change.

Give this pie a try; I hope you will find it as irresistible as my husband does! 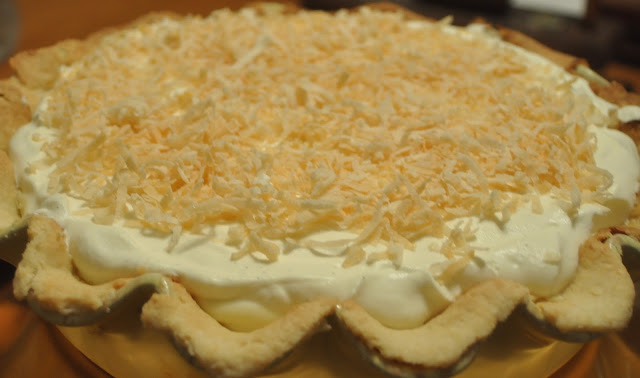 Method:
Put your butter pieces, flour and rum into the freezer to chill until very cold (1/2 hour). Meanwhile, put your sweetened coconut shreds into a food processor and pulse to finely chop. Add the salt, sugar and the cold flour, and pulse to combine. Add the butter pieces in and pulse until the mixture resembles corn meal or coarse crumbs. One tablespoon at a time, drizzle in the rum while pulsing until the dough comes together. Dump the dough onto a flour surface, and form it into a disk. Wrap in plastic wrap and chill for a half hour.

Preheat your oven to 375 degrees F. Roll out your chilled dough on a floured surface to about a14 inch circle. Place this into a 10 inch pie plate. Crimp the edges. Line the crust with aluminum foil and fill it with dried beans, rice or pie weights. Bake the crust for 15 minutes, carefully remove the weights and aluminum foil, and bake for another 10 minutes. Cool the pice completely before filling. 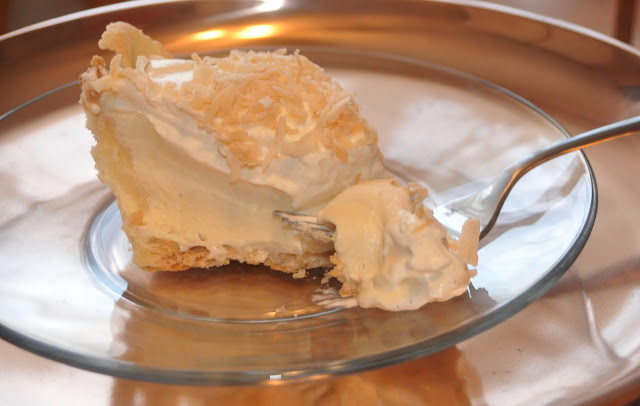 Method:
Preheat your oven to 250 degrees F. Spread the 1/3 cup sweetened shredded coconut onto a baking sheet. Pop it into the oven for about 5 minutes, or until the coconut is lightly toasted. Remove it from the baking sheet and set is aside.

Combine the quarter cup sugar, cornstarch and 3 egg yolks in a large bowl. Beat until pale, smooth and about doubled in volume. In a medium saucepan with a heavy bottom, combine the sweetened shredded coconut and half and half. Cook on medium heat until the mixture is barely simmering.

Pour a small amount of the coconut flavored half and half into the eggs, and whisk together. Add another small amount until the egg mixture is warm (this will temper the eggs). Return the mixture into the saucepan and cook on low heat, whisk vigorously and constantly until the mixtures get very thick. Remove from heat and add the butter. Strain the mixture though a sieve to ensure there are no lumps and it is silky smooth. Allow to cool to room temperature with a piece of plastic wrap pressed up against the surface to avoid a skin forming. Once cooled, you can proceed with the next steps.

To the pastry cream, beat in the sweetened condensed coconut milk. Set aside.

With a electric hand mixer, beat the softened cream cheese until light and fluffy. Pour in the coconut pudding pastry cream mixture slowly, ensuring a smoothly beaten mixture. Add 1 teaspoon of vanilla bean paste and the tablespoon of coconut rum. Set aside.

In a cold bowl, beat the cold whipping cream, sugar and vanilla to barely stiff peaks. Fold half of this whipped cream mixture into the coconut pudding mixture.

Fill the piecrust with the coconut pudding mixture, then top with the remaining whipped cream. If desired, sprinkle with toasted coconut. Chill for at least 6 hours or overnight before serving.


Add the coconut milk and sugar to a heavy bottomed saucepan and stir together well. Heat the mixture on low until the sugar has dissolved. Once the sugar has dissolved, stop stirring (this will prevent crystals from forming). Bring the mixture to a simmer and allow it to simmer for 30 to 40 minutes, or until the liquid has reduced by about half. Once there, pour into a jar, allow to cool, and refrigerate until use. 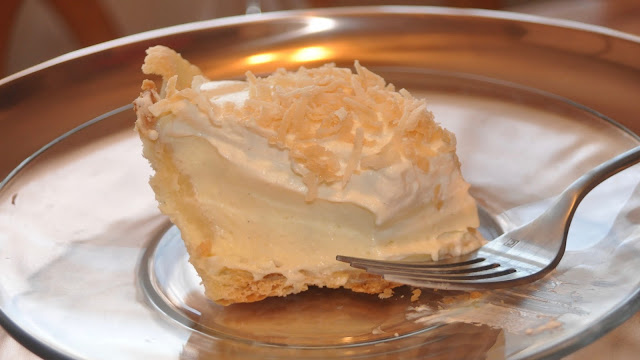