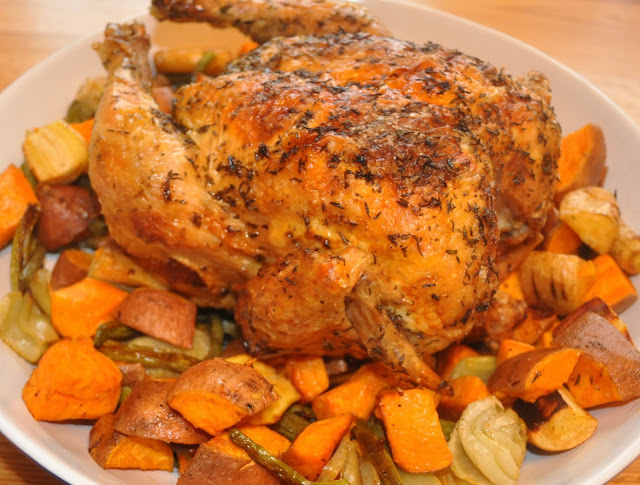 I do love to visit thrift stores. I find a lot of my plates, cups and glasses there for a steal. Sometimes I collect old pyrex or corning ware dishes; I especially love the cornflower blue pattern as my mother and grandmother had them for their casserole dishes. Every once in a while, I will find an appliance that I had early wanted but could never get due to price or lack of availability.

Once upon a time, I found a fully functional Nespresso espresso maker at my local Goodwill for 5 dollars. Granted, I did not know that it would work until I brought it home and bought the pods to test it, but it’s been making me solid espressos and lattes for one year now.

The other day, I saw a Cuisinart Vertical Rotisserie at my Goodwill. I had wanted this rotisserie previously; I had visions of making Doner Kebab in it (as they use vertical rather than horizontal rotisserie). I had not purchased myself the Vertical Rotisserie as I already have a Hamilton Beach Horizontal Rotisserie. Moreover, the Cuisinart model was no longer available, except of Ebay for 500 dollars. At Goodwill, the tag said 30. I was sold.

I knew I had to test the rotisserie out on a known entity, before I experimented with something as foreign to me as Doner Kebab. I had to try to rotisserie a chicken in the machine, to compare it with traditional roasting and horizontal rotisserie. I had a lot of fun, ad the bird came out beautifully. I can see how the browning of the skin is different than my other methods, but the meat is still juicy, the skin crispy, and I even have drippings for a pan sauce. The only caveat is that if you want roasted vegetables, you have to make them separately in the oven. All and all, it was a fun purchase and gave me an excuse to rotisserie a bird.

Try this out; it is a very simple recipe but the result is juicy and delicious. Enjoy! 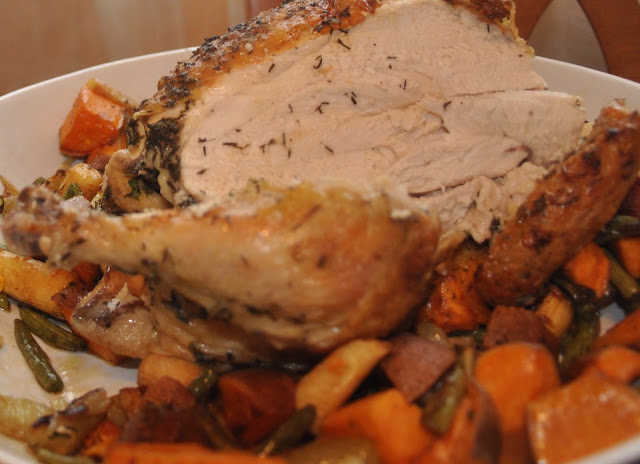 Method:
If you have a rotisserie oven, use it! Set the temperature to 425 degrees and the timer to 2 hours. If not, preheat the oven to 425 degrees F.

Prep the chicken: liberally coat it, olive oil, thyme, salt and pepper. Slide the soft butter underneath the skin of the beast.Tie the bird as your rotisserie recommends, or tie the legs together and place the chicken on a pan with a rousing rack. Tuck the wingtips under the body of the bird. Place it in the oven and roast.

When you have about a half an hour left, toss the vegetables in olive oil, salt and pepper. Spread them on a thin layer on a baking sheet, and bake them in a 425 degree F oven for 30 t minutes.

Roast or rotisserie your bird until a thermometer inserted into the thigh reads 165 degrees F. Remove the bird from the oven, and tent with foil. Allow it to rest 20 minutes before carving.

Use the drippings to make a pan sauce. Deglaze the pan over medium-high heat with the quarter cup of wine. After the sauce has reduced, add the butter and lemon juice. Slim your chicken, serve it alongside your vegetables, and generously drizzle with the pan sauce. Enjoy! 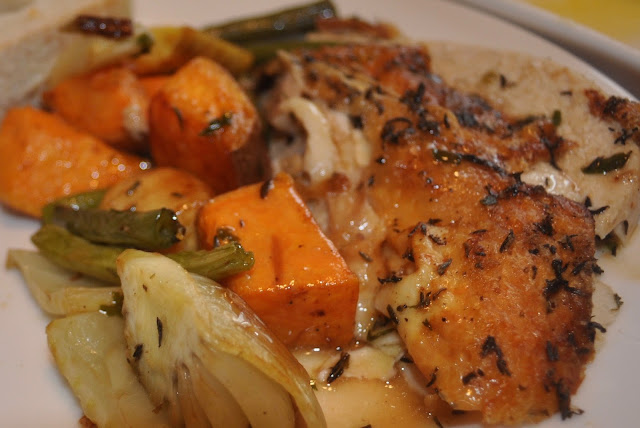